When it comes to Black Friday, I'm a conscientious objector.

The Friday after Thanksgiving should begin late, after a deep turkey tryptophan induced sleep that makes you sleep in.

Then comes a few cups of coffee and pie as you sit around in your robe a little too long.  Then the kids should spend a lot of time outside and friends stop by to say hello and to eat a little turkey and drink a little wine.


If the Lord opens the door for some do-gooding, you should be busy blessing others, too.

The Friday after Thanksgiving is for living in the afterglow of the gratefulness and contentment we fostered on Thursday.  If you did Thanksgiving right (meaning you focused on all your abundant blessings and how you have more than you deserve and could possibly need and how the Lord has provided so much that your heart is literally overflowing with grace) than I don't see how it's possible to stand in line to fight, elbow, push and swear your way to a 40-inch on sale at a big box electronic store.

It was a beautiful day.  A perfect Black Stay-At-Home Friday.

Posted by Gombojav Tribe at 8:14 PM 3 comments: Links to this post

When you bragged that this dish was an outrageously delicious bit of heaven you weren't joking. 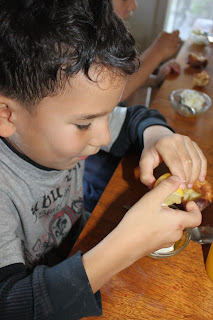 Posted by Gombojav Tribe at 11:13 PM 3 comments: Links to this post

After a rough day, nothing makes me feel better than beautiful food. 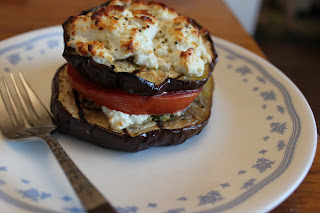 In a mortar with a pestle mash fresh basil with some garlic, fresh lemon juice and salt. 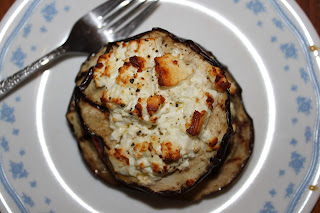 On each eggplant slice smear some basil mash.  Then layer up tomatoes, more eggplant and feta to your heart's content

Liberally drizzle with olive oil and give a good grind of Trader Joe's Flower Pepper.

Finish in the oven for about 15 minutes until the cheese is all toasted. 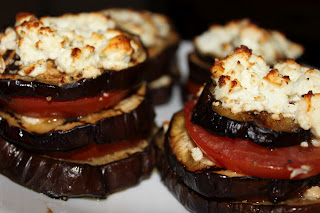 Enjoy with some crusty bread and a rosé, preferably in the garden.  Breathe deeply and pretend you didn't lose your temper with the driver in the other car.

Back in August we went wine tasting and picnicking with some friends.  Over lunch our Haitian friend, Ed, told us a hilarious tale of how he became a musician and how (among the many instruments he plays) he learned to play the accordion.

The story goes something like this:  Ed was in high school in Haiti and his father wanted to inspire him to do better in school.  So, he told Ed that if he raised his grades to a certain point he could have whatever he wanted.  So, he brought his dad a catalog and said, "I want this."  He pointed to.......an AK47.

His father agreed.  Ed worked hard in school and achieved his father's academic goals.  One day Ed comes home from school and his father gives him a box.  He opens it and finds, not his gun, but an accordion.  His father had decided that an assault weapon was not a good prize and got him an accordion instead.

Quite disappointed, Ed pushed the accordion under his bed and ignored its presence entirely.  After some time he had the following thought: "I'm the only one losing on this deal.  Now I don't have a gun and I don't have an accordion."  So, he pulled it out, got a teacher and learned to play the accordion.

Hearing this story over our picnic, I told him how much I had enjoyed the accordion music in Paris and how no French meal is quite complete without accordion in the background.  I told Ed how much I would love to hear him play.  He said that there was one problem: he didn't have an accordion.  I said that I had access to two!  We have Gana's dad's instrument and my mother has a beautiful accordion.  Unfortunately, none of us play.  He said, "Well, you make me a real French dinner and I'll come play the accordion."

Seizing the moment, I said, "Deal!"  We shook on it, in the presence of our friends as witnesses.  The only stipulation was that those who witnessed the deal also had to be present for the meal.

So, this past Friday we both made good on our promises.

My friend KayLee came over early in the day.  We were like two school girls preparing for a tea party!  We rearranged the furniture, set the table properly, cooked up a storm in the kitchen and generally played house.

The rest of the children of the party had a French peasant's picnic upstairs. Homemade French bread, cheese, a little pot of jam, pastries and iced tea. When they had feasted they went downstairs for a movie and popcorn!


As if the weather somehow understood our romantic and nostalgic mood, Saturday morning was gorgeous. We sat on the back porch sipping coffee, eating leftover bread and cheese, cuddling the baby and counting our blessings--namely our wonderful friends who know how to have fun! 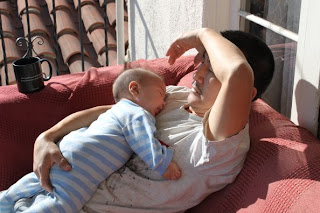 Special thank you to my mom, whose accordion made it all possible.
Posted by Gombojav Tribe at 1:05 PM 3 comments: Links to this post

I actually don't care for a lot of "holiday" food.

I don't like stuffing--let's be honest folks, it's soggy bread.

I don't like yams that are full of sugar and covered in marshmallows--if you're gonna eat a yam or a sweet potato, just treat it like a potato!  Don't try to mask its taste with all that extra stuff.

I only like cranberries if they are from fresh berries.  Cannot stand that canned stuff.

I don't like green bean casserole or any other casserole that has a cream-of-X soup in it or is covered with those crispy fried onion bits stuff.

I don't like ham a lot of time--unless it's a really expensive kind.  If it's the kind from the regular market it's just got a strange texture and squeaks on my teeth.

But, I LOVE the holidays.  So I have to do my own thing.  One thing I adore is Christmas breakfast.  I love breakfast in general, which is not cereal.  Cereal is a great snack.  Breakfast is warm and buttery and requires a fork.  Christmas breakfast especially.  The oven must be turned on.  And it should take a good long time to eat it, while we sip coffee or tea and watch the sun move across the window. 
Posted by Gombojav Tribe at 9:11 PM 6 comments: Links to this post

This was our dessert last Sunday, while celebrating the fourth Sunday of Advent: 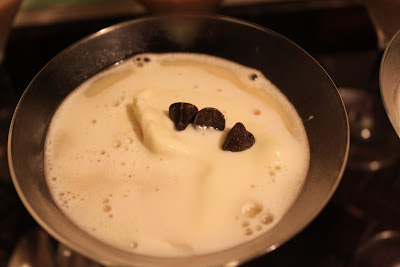 Any time is tea time when it comes with ice cream and chocolate chips!
Posted by Gombojav Tribe at 11:18 PM 1 comment: Links to this post

I'm a little late to the chia party.  All the health conscious people I know have been recommending chia seeds for a while.  I finally tried them recently.  Guess what?  I'm in love.  They go in our morning oatmeal daily.  they get sprinkled in and on top of bread.  They get tossed into smoothies.

Today I debuted them for dessert!

Actually, Meg made this by herself. 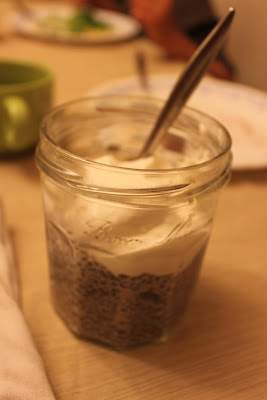 Chia Pudding
(enough for our crowd!)

Put all ingredients in a bowl and whisk together.  Let it set for about 45 minutes, stirring every five minutes or so.  This will thicken by itself.  It will be sort of like tapioca pudding. 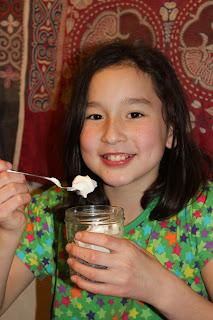 Can dessert be healthy?  I say "Yes!"
Posted by Gombojav Tribe at 8:12 PM 2 comments: Links to this post

My name is Gombojav and this is my blog. It's a Gomboblog!

I am the only Foodie I know who has a big family. All the meals you see are what I make for my whole family--including my seven children, ages 1 to 11 years old. No "kid" food here!

(The name of blog came from my friend, Flo.)